On the trails of champions

No other slope in the ski region is as renowned as the World Cup slope on the Chuenisbärgli. You can now have your personal ski movie shot where the star skiers meet up to battle it out in January. And that World Cup fever also extends to the skicross park and slalom skiing on the Aebi.

If this isn't a worthy alternative to the two race days: the original World Cup run (slope 80), a starting gate, light sensors and two cameras constitute the professional infrastructure for the World Cup Skimovie.

It also gives amateurs a unique racing experience, all filmed non-stop from start to finish. What's more, this sporting experience is extremely easy to access: simply scan in your ski pass and you're set to go. Both cameras will now record your descent and a professional video will be produced immediately. This personal ski video can be downloaded later at no charge from www.skiline.cc by entering the respective ski pass number. 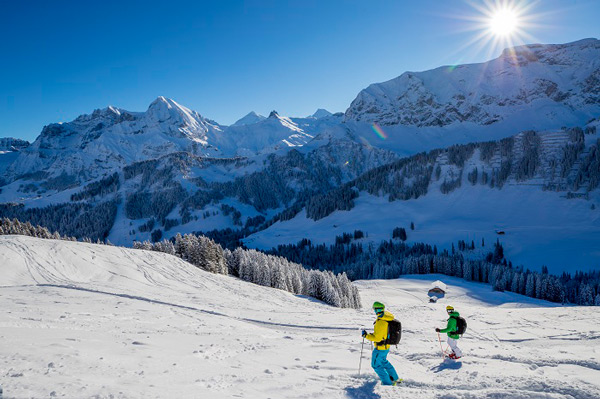 Fancy putting in a few turns at night on the original World Cup slope on the Chuenisbärgli? Or what about exploring this historic slope by moonlight – a venue the world's leading slalom skiers have been beating a path to since 1967?

Every Friday from 7 February to 6 March 2020 at Chuenisbärgli

Free for holders of a valid day/multi-day ticket or season pass.